An outdoor surveillance system is one of the most practical and affordable ways to beef up security in the home. There is a diverse array of surveillance systems to choose from, and buyers are faced with the unenviable task of trying to sift out the right system that meets both their security needs and financial situation. We have compared dozens of best-selling camera systems, and we have compiled a list of the best outdoor wireless security camera system with DVR.

This 8CH Camera system is the right solution for people who have big homes or small business premises. This system comes with four or eight 2.0MP 1080p Full HD 30fps HD cameras. These cameras are encased in waterproof IP66 aluminum cases, so they can be used in outdoor spaces.

The cameras are equipped with night vision, which is effective to a distance of up to 100ft. The buyer has a choice between a 1TB and 2TB NVR. This system does not require connection of cables, and it connects via the internet.

The ZOSI 8 CH system comes with free iOS and Android apps that allow access to the video feed from anywhere.

This system comes with a one-year warranty.

This system comes with a 2GB SD card that can capture up to 350 minutes of footage. The system has a three-way intercom feature that can allow for communication between someone operating the cameras and the monitoring system. The system has a digital wireless system, so no wires are required when connecting. Unlike some systems on our list, whose functions are limited to video recording, this system has built-in microphones for audio recording.

This camera system comes with a one-year warranty. 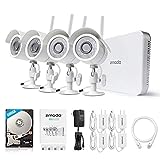 The Zmodo 8CH NVR system is a contender for users who have medium to big-sized homes. This cameras system is easy to install, and all you need to do is to install the cameras and plug in the adapters. The camera has motion detector features and can send alerts on your mobile gadget.

Buying this camera system gives you access to the free Zmodo app, which can enable you to monitor footage at your home in real time. Unlike the ZOSI 8CH system that comes with its own hard drive, you will have to buy a hard drive separately for this system. The four cameras in this system have an intelligent recording feature that will record at lower frames per second when no motion is detected saving storage space.

This system gives an extremely detailed picture and records in 720p at up to 100 fps. The cameras are equipped with wide-angle 2.8 mm 81 degree wide-angle lenses, and its night vision abilities are effective at up to 65 ft. The cameras are weatherproof and are recommended for use in temperatures ranging from 14 to 122 degrees Fahrenheit 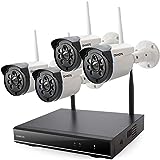 The ONWOTE 1080P system is one of the best outdoor wireless security camera systems with DVR. Like the ZOSI system, the cameras in this system are 960p cameras with 1.3MP sensors. This camera, however, is not battery powered, and it needs an outlet. This system does not use up the internet when being accessed around the home, and users stand to save money on internet bills if they opt for this system.

This NVR system doesn’t come with a hard drive but is compatible with 3.5” external hard drives with capacities of up to 6TB. The cameras have formidable night vision abilities, and they are sensitive up to 80 ft. The system also comes with a network cable, and its NVR has a built-in router.

This camera comes with a one-year warranty.

The ANNKE Home security system consists of 8 1080p IP66 weatherproof cameras and a five-in-one DVR, one of the best outdoor wireless security camera system with DVR. The cameras have night vision, and its abilities stretch out to 100ft. This system records in the H.264 codec enabling users to save space. The system has motion detection abilities, and you can customize it to minimize false alerts.

Like most other systems on our list, this system has an app that can enable you to control the camera remotely. This system comes with a 1TB HDD, and storage can be expanded. The system has a smart video playback system that will only play important events in normal speed and will play at 8x for the rest of the footage.

This system comes with a two-year warranty. 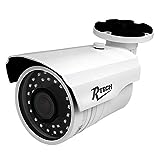 If you have apartments or small homes and want an inexpensive solution for your surveillance needs, you may find this R-Tech system adequate. This no-frills system consists of one weatherproof camera with a varifocal lens.

However, this camera lacks a wireless connection and mobile app.

This camera comes with a one-year warranty.

The OOSSXX system uses Wi-Fi to connect four 720p cameras to an NVR. The cameras are waterproof and are night-vision enabled. This system can support up to eight cameras and can be used wirelessly or with wires. The cameras have IR cut filter and auto switching, and they record at an acceptable quality even at night.

Buying this system gives you access to the free IP Pro and Eseecloud mobile apps that enable you to monitor your home remotely. The system can send out alerts when it detects movement in the home, and you can customize the scope of this selection to minimize false alarms.

However, you will need to buy your own hard drive, because this system doesn’t come with one.

This camera has a one-year warranty for parts. 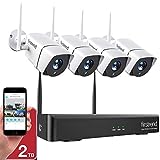 This system from Firstrend comes with four 1080p bullet-style cameras and an NVR recorder. The camera comes with a 2TB HDD, which can be upgraded to 4TB. The system is a plug and play system, so you don’t need professional installation. The cameras don’t come with batteries, therefore, you’ll need to connect these cameras to power at all time.

You can download a free Android/iOS app for remote monitoring and video playback The system allows for email or app alerts when the motion detection is triggered, and you can customize motion detection to reduce false alarms. The cameras are night-vision enabled, and they are effective up to 65 ft.

This camera system comes with a one-year warranty. 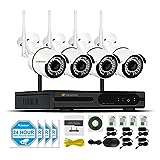 This system by Jennov is one of the best outdoor wireless security camera system with DVR. This system has an NVR and operates via a wireless network. You can alternatively connect an Ethernet network cable to be able to monitor the cameras remotely via a free app.

The camera has 36 IR LED light, and its night vision is up to 65 ft. The system doesn’t come with a hard drive, so you will have to source one independently.

This system has a two-year warranty

This Night Owl camera system could be of the best outdoor wireless security camera system with DVR in terms of features. The system comes with four 1080p cameras and a 1TB hard drive, but the system can support up to 4TB. The cameras in this system are decent and have a 100-degree wide-angle lens.

Unlike most systems on our list which only record video, this system has a two-way audio feature, which can be used as an intercom in addition to each camera having abilities to recording audio within 20 ft of the camera.

This system’s Wi-Fi covers 300ft, and no internet is required to operate and record within the Wi-Fi radius. The camera has decent night vision detection features up to 100ft. This system has one of the smartest motion detection systems in the industry and motion detection can only be triggered in conduction with heat detection. This reduces the rate of false alerts.

This system has a one-year warranty.

1. What Is an Outdoor Wireless Security Camera System?

An outdoor security camera system normally consists of at least one camera connected wirelessly to a storage device. The system records video to enable the householder to monitor the home. The best outdoor wireless security camera system with DVR will usually have motion cameras with good resolution, a motion detection feature, and night vision abilities.

2. How Many Cameras Do You Need in Your Surveillance System?

This depends on the camera’s viewing angles and the size of your home. The viewing angles determine how much space one camera will cover. You may need a number of cameras or multi-packs to cover the home. PTZ cameras with pan/tilt/zoom features will naturally cover more space than a camera without those features.

3. What Is the Right Resolution for a Surveillance Camera?

The higher the resolution, the clearer the images record. Cameras with 1080p resolutions or higher have the clearest images. We believe that 720p (1080×720) resolution should be the bare minimum of any surveillance system that is worth its salt. However, cameras with high resolutions need compatible DVRs, and the recording will take up more space than low-resolution cameras.

4. How Do I Determine How Good a Camera Is for Night Recording?

5. Should I Choose a Dome-Style or Bullet-Style Camera System?

Although both camera styles arrive very easy to recognize by a potential intruder, it is harder for the intruder to know that a dome-style camera is pointing at them compared to a bullet-style system. Dome-style cameras may ward off some intruders as a result.

The following products were reviewed based on the following parameters: resolution of the camera, the size of the DVR/NVR inbuilt storage, and night recording abilities. We also considered the number of cameras in the system, audio and intercom abilities, as well as the motion detection abilities of the system. Our review favored systems which come with free mobile apps for remote monitoring.

This system is equipped with detailed 1080p full HD cameras with night vision and customizable motion detection features. We like the fact that the system comes with an inbuilt 1TB hard drive at a low a price.

Buyers who need an intercom feature or audio recording should consider the Defender system or the Night Owl system. But, both systems cost more than the average system on our list. 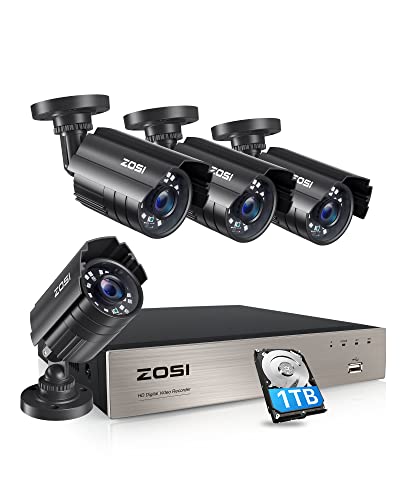 Home Essentials That Everybody Should Have: Top 10 Picks

As a participant in the Amazon Services LLC Associates Program, this site may earn from qualifying purchases. We may also earn commissions on purchases from other retail websites.